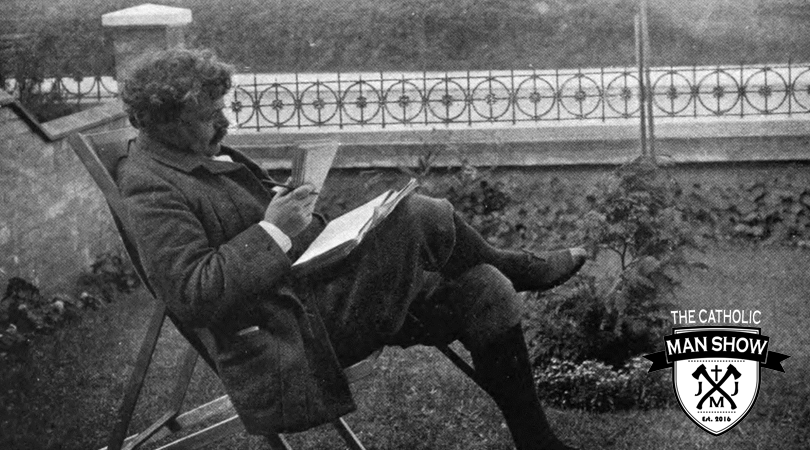 Recently, a Friend of the Show asked about G.K. Chesterton in our closed Facebook group. (By the way, we have a great group of men who are Friends of the Show. We have challenging conversations almost daily. If you want to become a Friend of the Show, shoot us an email: thecatholicmanshow@stmichaelradio.com.)

Chesterton was often mentioned by another great Christian author, C.S. Lewis.  Lewis once wrote in a letter to Sheldon Vanauken asking Vanauken, “Have you ever tried Chesterton’s The Everlasting Man? The best popular apologetic I know.” High praise from a highly regarded Christian apologist. I’m sure it was Chesterton’s mastering ability at turning a phrase and witty intellect that caught the attention of the, then atheist, Lewis. Regardless, Chesterton’s writings has caught the attention of millions for many generations. So much so, the Church has taken the first steps to opening the Cause of Canonization.

Chesterton once said, “Tolerance is the virtue of the man without convictions.” This seems to be more prevalent today than when he said it. Today our culture seems to hold tolerance in the same standard as courage, temperance, honesty, and prudence. In order for a person to possess convictions about a belief, it is necessary, by definition, for the person to be convinced that his or her belief is true. However, if I sincerely consider everyone’s beliefs, lifestyles, and truth claims as equal to my own, I can no longer claim any genuine conviction regarding my own beliefs. Chesterton was conveying nothing is behind mere tolerance. There is no conviction or virtue that supports tolerance for tolerance sake. When you hear the word tolerance, you instantly think of the new trigger phrase, “Don’t judge.”  Call me crazy but I would rather have a disagreement with someone who loved me than to be tolerated by someone with only apathy. I think Chesterton’s point is this: When we are faced with competing truth claims, the only way to arrive at a meaningful conclusion is by investigation. It’s not by saying your truth is your truth my mine is mine, as this is the equation for insane relativism.

Haven’t read G.K. Chesterton before? Here’s 5 tips to read before you start.

Fiction
1. The Father Brown mysteries (find them here)
2. The Man Who Was Thursday
3. The Ball and the Cross
4. Manalive

Social Criticism
1. What’s Wrong with the World
2. The Outline of Sanity