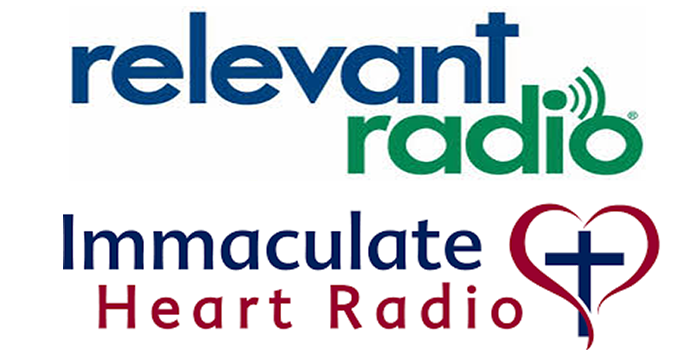 RR & IHR: A UNION MADE FOR HEAVEN

Albuquerque, Oct 13 (CRU) — It is a union made for heaven: Two big owned and operated Catholic radio networks will soon unite to form the largest Catholic radio system in the western hemisphere. The surprise merger of Immaculate Heart Radio and Relevant Radio will produce a system of 109 AM-FM-translator stations in 50 radio markets in 36 states covering 132 million people—41.4% of the U.S. population.

When one looks at the statistics, the new network will be a formidable one. It will cover

The news was announced tonight, Thursday, October 13, at an event in the Archdiocese of Chicago to the applause of many, including several bishops. Father Francis Hoffman, CEO of Relevant Radio, will continue as CEO, and Doug Sherman, president of Immaculate Heart Radio, will be president of the new organization, to be known as Immaculate Heart Media dba Relevant Radio. The existing Starboard Media Foundation will be dissolved into the new organization.

“Talks began about 15 years ago,” Mr Sherman said. “Relevant Radio several years ago approached us and suggested a merger or the sharing of programs. But I couldn’t see how it could be done. Then, earlier this year, a Relevant Radio official met with one of our board members, Chuck Haas, over a meal to discuss merging the two networks. The problem was we were both carrying heavy debt loads and it would not have made sense to merge under this load. So, we came to the conclusion that a merger would be worth pursuing if we could come up with money to pay off the debts. I thought, ‘Well, that is not likely to happen anytime soon,’ but amazing things have happened in just the last four months.”

The new network will be coast to coast. Immaculate Heart Radio will thereby expand from a regional California and Southwest Catholic network (Its most eastern stations are in New Mexico) to a network in national scope. The present Relevant Radio will thereby expand from a Midwestern and East Coast network (Its most western stations are two LPFM affiliates in Montana) to reach the Pacific Coast.

The official launch is still some time off. In addition to the usual detailed legal and economic processes that have to be traversed, the transfer of the licenses of all Immaculate Heart Radio and Relevant Radio AM and FM stations and translator stations to the new organization will have to be approved by the FCC — which could take 2 or more months. “We hope to close in the first half of 2017. Integration of systems and programming will take up to 2 years,” Father Hoffman said.

“Why the union?” Father Hoffman was asked. “The economics was a consideration,” he answered, “but really not the driving one. If either of us is going to grow, we are going to have to unite. There are few big radio markets where there is no Catholic radio anymore, so we have to focus our strength on development of new programming and new media.” No jobs at either existing network will be lost, Father Hoffman assured Catholic Radio Update.

The new network will launch with considerably less debt. A fund to raise $30 million to reduce the outstanding combined debts of IHR and RR is underway. “We have already raised 75 percent of that $30 million, and we expect to raise the rest by the end of the year,” Father Hoffman said. “This elimination of a huge debt load will give us freedom to be creative in programming and expand in desirable directions.”

Mr Sherman is of the same mind. “The reduction in the debt load will allow us greater ease in operating and in being able to use more funds to create the best of programming. We live in an age of new media when all the listeners to media in America expect the best – programming possible. We will be able to do everything even better than we are now.”

Regarding specific questions about program schedules, he said “We are not into the details as yet. Things will be worked out as time goes on. It will be an orderly transition and I’ll still be there.” He assures listeners that the Immaculate Heart Radio sacred music channel on the Internet will continue.

Like Father Francis, Mr Sherman emphasized that the merger will not cause any loss of any jobs either at IHR or Relevant Radio. “We do not need to cut staff in either office. Whenever there is talk of a merger anywhere, the staff always becomes greatly concerned about their job security. There is no reason for them to worry.”

The launch of the new Relevant Radio is a sign of the vibrancy of Catholic radio; from a handful of stations in 1998, mostly diocesan in ownership, the number of Catholic stations including translators has expanded to some 432 on the air with perhaps another 50 or more to be launched by the end of 2017. The development of a second national over-the-air Catholic radio network in this country is not divisive; it is contributive. Public radio stations have found that when a second public radio station enters a market, the new arrival does not subtract from the audience of the first station; on the contrary, it creates new listeners and the total number of listeners to both public radio stations in the market actually increases: both are winners.6

Because Catholic radio in many ways is like public radio—noncommercial, a niche format, a small but devoted audience, an audience that spends more time listening (TSL) to it than do listeners to commercial stations; small and tight budgets; dependence on national networks (NPR, APM, PRI) for almost all of its programming—we can expect the same to happen with the launch of the new Relevant Radio. We can expect more listeners will discover Catholic radio programming and become devoted listeners to it.

Mr Sherman told Catholic Radio Update that he is happy about the merger. “I am pushing seventy,” he said, “and my energy is starting to wind down while Father Rocky’s’ energy is winding up. But I’ll be president and have specific duties and interests. As Archbishop Gomez mentioned, this is a historic moment in Catholic communications in this country, and I am very excited to be here for it.”