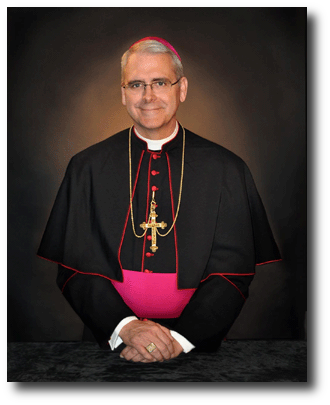 Did you know that Archbishop Paul Coakley was the recipient of a nationwide Award for Outstanding Catholic Leadership? Click here to read the story.

Paul Coakley was born in Norfolk, Virginia, to John and Mary Coakley.[1] His mother (d. March 10, 1988) was of French descent, while his father is of Irish descent.[2] The second of three children, he has an older brother, John, and a younger sister, Mary Christina. At age 2, he and his family moved to Metairie, Louisiana, where Coakley attended St. Mary Magdalen School from 1960 to 1965. The family then moved to Overland Park, Kansas in 1965, and Coakley there attended Cherokee Elementary School for two years.[1]

He attended Broadmoor Junior High School (1967–1970) and Shawnee Mission West High School (1970–1973) before studying at the University of Kansas, from where Coakley obtained a Bachelor of Arts degree in English and Classical Antiquities 1977.[1] During this period, he was also a student in KU’sIntegrated Humanities Program. After graduating from KU, Coakley traveled in Europe and briefly considered a monastic vocation at the Abbey of Notre Dame de Fontgombault inFrance before returning to the United States, where he entered St. Pius X Seminary in Erlanger, Kentucky in 1978.[1]

On April 8, 1982, he was ordained a deacon by Bishop David M. Maloney.[3] He also studied at Mount St. Mary’s Seminary in Emmitsburg, Maryland, earning a Master’s in Divinityin 1983.[1]

Coakley was ordained a priest by Bishop Eugene J. Gerber on May 21, 1983.[3] He then served as chaplain at St. Francis Regional Medical Center in Wichita from June to August 1983, and as associate pastor at St. Mary’s Church in Derby from 1983 to 1985. He then furthered his studies in Rome at the Pontifical Gregorian University, where he received aLicentiate of Sacred Theology in 1987.[1]

Upon his return to the Diocese of Wichita, Coakley served as chaplain at Kansas Newman College from 1987 to 1989.[1] He also was director of the Office of Youth and Young Adult Ministries (1987–1991), and pastor of Our Lady of Guadalupe Church (1989–1990). From 1990 to 1995, he served as associate director of the Spiritual Life Center and associate pastor of St. Thomas Aquinas Church. He served as pastor of the Church of the Resurrection from (1995–1998) before returning to Mount St. Mary’s Seminary in Maryland, where he was Director of Spiritual Formation from 1998 to 2002.[1]

Coakley served as director of the Spiritual Life Center in Wichita from 2002 to January 2004, when he became Vice-Chancellor of the Diocese of Wichita. In addition to his role as Vice-Chancellor, he served as administrator of the Church of the Magdalen from July to December 2004.[1]

On October 21, 2004, Coakley was appointed the ninth Bishop of Salina by Pope John Paul II.[3] He was consecrated on December 28 by Archbishop James P. Keleher, with Bishops George K. Fitzsimons and Eugene J. Gerber serving as co-consecrators.[3] He selected as his episcopal motto: Duc In Altum, meaning, “Put Out Into The Deep” (Luke 5:4)[which?].[2] During the 2008 presidential election, Coakley declared, “To vote for a candidate who supports an intrinsic evil, such as abortion orgenocide, would require a proportionately grave moral reason for ignoring such a flaw.”[4] He later stated that House Speaker Nancy Pelosi and Senator Joe Biden “misrepresented Catholic teaching on abortion” in their respective interviews on Meet the Press.[5] He also said that pro-choice Catholic politicians are “a scandal to others” and “contribute to the perpetuation of a grave evil,”[5] and that denying them Communion “in many cases becomes the right decision and the only choice.”[6] Later calling the victory of Democratic candidateBarack Obama an “undeniable irony,” he said that the election of the first African-American president “signals that our nation has crossed a threshold in the struggle for civil rights” but also noted Obama’s “denial of civil rights and legal protection to a whole class of persons as well, unborn human beings.”[7]

In March 2009, Coakley described President Obama’s reversal of the Mexico City Policy and nomination of Governor Kathleen Sebelius asSecretary of Health and Human Services as “serious assaults against the rights of conscience and our efforts to protect innocent human life.”[8] In the following April, he expressed his “deep disappointment” at the University of Notre Dame’s decision to have Obama deliver its commencement speech and receive an honorary degree, saying, “The University’s invitation undermines the Catholic identity and mission of the institution.”[9]

Within the United States Conference of Catholic Bishops, Coakley currently sits on the Subcommittee on Home Missions; Committee on Clergy, Consecrated Life and Vocations; and Committee on Evangelization and Catechesis. He is also a Fourth Degree Knight of Columbus, and a member of the Equestrian Order of the Holy Sepulchre of Jerusalem.[1]

On December 16, 2010, he was announced as the Archbishop-designate for the Archdiocese of Oklahoma City, and was installed on February 11, 2011, replacing retiringEusebius J. Beltran.[10] At the announcement of his appointment at the pastoral Center in Oklahoma City, Coakley remarked: “This new pastoral responsibility is an opportunity and a challenge that I certainly had not sought, but one which I will eagerly embrace with all my heart.”[11]

On November 18, 2013, at the General Assembly of the United States Conference of Catholic Bishops, Archbishop Coakley was announced as the new chair of the board ofCatholic Relief Services (CRS),[13] succeeding Bishop Gerald Kicanas of Tucson. The international relief and humanitarian agency of the US Catholic Church, CRS operates in about 91 companies, and the board stewards a budget of over $700 million.[14] Coakley had been on the board since 2012, and at the time of his appointment, the agency was in the midst of responding to the impact of Typhoon Haiyan in the Philippines. Coakley described himself as “humbled” and “honored” to chair the 70-year-old organization.[15]

In his first months as chair, Archbishop Coakley undertook visits to the Holy Land[16] and the Philippines[17] to observe the agency’s programs and meet with local staff and beneficiaries.

In August 2014, Coakley criticized the Oklahoma City municipal government for allowing a Satanist gathering at the Civic Center Music Hall, saying, “If someone had come to them to rent the Civic Center to stage a burning of the Koran or to hold an event that was blatantly and clearly anti-Semitic, I think they might find a way to prevent it … Not all speech is protected if there is hate speech and it is intended to ridicule another religion … I don’t believe it is a free speech matter.”[12]

This information was provided by Wikipedia – St. Michael radio has not personally confirmed any of the above information