5 Virtues of Chivalry by The Catholic Man Show 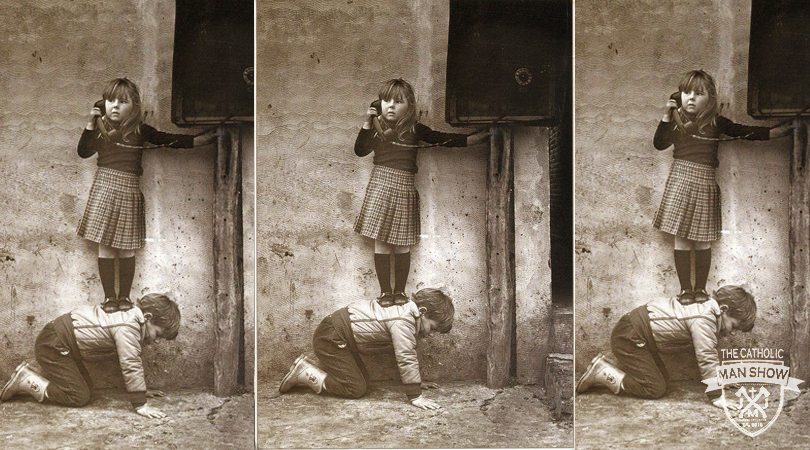 How are we going to move forward as men and grow in holiness and strength if we do not know what it means to be men of distinction. Yes, we can say that virtuous women help men find a higher standard so as to be worthy of her but why are we left to wait for the virtuous when we can begin practicing chivalry now? You may also say, ‘there are no such women who would be attracted to the morally upright and chivalrous…not in our age!’ I say to the contrary that there are many broken women that never knew true chivalry in the first place. Not to mention many of our enemies who could become our allies if only we would practice the virtues of Chivalry. Traditionally, according to the Medieval code of Knighthood and Chivalry, there are five virtues of Chivalry of which we can contemplate on to not only strengthen us as men but as soldiers of Christ.

Fidelity – The word fidelity is derivative from the Latin word fidelis meaning faithful. So we are to do all that we can to increase our faith. Recall in scripture where Christ had commanded all who listened to “pray for your enemies and do good to those who persecute you” and what was the response…”Increase our faith”! This should be a daily prayer so that we may not succumb to despair. Fidelity also concerns loyalty; loyalty first of all to the rights of God, to your family, and to all your neighbors. May the infinite merits of Jesus’ life, death, and resurrection offer for all petition for graces necessary to increase in the virtue of fidelity – the service of faith and adherence to the rights of God. Amen.

Honesty – For obvious reasons, we should all strive to be honest with ourselves and others. For in the practice of honesty, we make ourselves agents against Satan, the father of lies. In practicing honesty, we increase trust in others about our conduct and therefore our words hold greater weight. May the infinite merits of Jesus’ life, death, and resurrection offer for all petition for graces necessary to increase in the virtue of honesty – the service of truth and the obedience to Christ’s command for innocence.

Courtesy – In the struggle for obtaining holiness we must remember that courtesy is a virtue of necessity. For in the Medieval ages, knights who fought against one another, even to the death, followed a conduct of warfare in which offered courtesy to their opponent. For it was dishonorable to win by dishonorable means and no true victory was had if obtained by deception or other forms of evil. Therefore, we are to extend courtesy to all people especially to the ones whom we do not agree with. Respect of another’s dignity is the mark of a gentleman and of the knight within.

Prowess – Strength for justice sake is the battle cry of those who champion the virtue of prowess! We are to do all that we can to obtain strength for that very cause. To achieve excellence in any undertaking we find ourselves faced with an element of this virtue. Driven by integrity, we are to courageously take on challenges for the common wealth of all people to advance peace and justice. This virtue does not affect the soul alone but also our own bodies. Recall that your body is the temple of the Holy Spirit and it is right to take care of it. This is not to say one must be overly obsessed with fitness but rather to take care of oneself so that we may carry out our common duty toward family and neighbors.

Generosity – Because we are often found blessed by God, we should remember to increase the virtue of generosity in our lives. Remember those less fortunate than you and how you may give to those who are in desperate need according to what resources are available to you. For it has been said, “it is better to give than it is to receive”, in doing so, we store up treasure in heaven where no thief may enter and steal. But this does not limit itself to material goods alone but also remember to be generous with your time to those who have no one. There are many of the sick, elderly, and widowed who struggle against the chains of despair and often losing that battle. Show these captives the key of release by bringing the virtue God graced you with and be generous with compassion.

5 virtues of Chilvary, Being a Gentleman, Chivalry, On Catholic Chivalry
Search