I think we need to take a step back and realize it wasn’t a matter of what God the Father did for Mary, but what he did for Jesus. What so many people don’t understand is that the Immaculate Conception of Mary is all about Jesus. It was because he was to take on his human nature in her womb that God deigned her to be free of all sin and therefore “full of grace” from Luke 1:28 (By the way, how can you be “full” of grace and have room for anything else?). It would be unthinkable, given the revelation that we have in Scripture and Tradition, for him to be conceived in anything but a holy place. David, Abraham, and Moses weren’t called to give birth to Jesus… Mary was called and she answered, “I am the handmaid of the Lord, let it be done to me according to your word”.

I am going to take an explanation from my friend, Timothy Putnam – who has a local Catholic Radio show on 102.9fm St. Michael Catholic Radio. Click here for more information on Outside the Walls.

“Catholics believe that Mary was saved from sin at the moment of her conception, for the sake of Christ. She was still saved (thus she said “My spirit rejoices in God my Savior”). She was made like Eve (without original sin). And she was given the choice just like Eve. But where Eve fell, Mary said “I am the handmaid of the Lord. Let it be done to me according to your word.” That she was saved and preserved from the stain of sin doesn’t make her deity, it doesn’t make her like God, it makes her like Eve before the fall.

Since Mary is a created being, and not divine, she is not someone to worship. Worship is reserved for God alone (Deut 6:13). We may honor those who have positions of authority or who have lived virtuous lives, but we may not worship them. Mary says of herself in Luke 1:48 “all generations will call me blessed.”

The presence of God cannot be housed in anything impure. This is why the Ark of the Covenant had to be made from Acacia wood (incorruptible wood) and gold. In Christ we have the manifest presence of God. If another human was to carry that presence of God, it would have to be pure, just like the ark of the covenant.  She was preserved from sin for the sake of the Incarnation of Christ. Not for her own merit, or for her own glory, but for the sake of the salvation of the world. Everything Catholics believe about Mary points to some essential quality of Christ.”

Early Church Fathers understood that Mary was conceived without sin. St. Justin Martyt, St. Irenaeus, St. Ambrose, St. Augustine, St. Gregory of Nazianzus, and many more agreed with this. Click here to see some quotes from these early church fathers regarding the Immaculate Conception

Also, I think it is important to point out the idea that Mary was conceived of original sin is relatively a new idea in the history of Christianity.  Even Martin Luther, who started the protestant reformation, believed Mary was conceived without sin even after his break from the Catholic Church. You can find it in his writings. For example:

“It is a sweet and pious belief that the infusion of Mary’s soul was effected without original sin; so that in the very infusion of her soul she was also purified from original sin and adorned with God’s gifts, receiving a pure soul infused by God; thus from the first moment she began to live she was free from all sin”
– Martin Luther’s Sermon “On the Day of the Conception of the Mother of God,” 1527.

“She is full of grace, proclaimed to be entirely without sin—something exceedingly great. For God’s grace fills her with everything good and makes her devoid of all evil.”
– Martin Luther’s Little Prayer Book, 1522.

Here is more of an in-depth look at the Immaculate Conception from www.newadvent.org. Click Here

Here is a good 2:22 minute video briefing… for those how have skimmed and/or skipped everything up to this point 🙂

I think Vatican II did a great job summarizing this:

“It is no wonder, then, that the usage prevailed among the holy Fathers whereby they called the mother of God entirely holy and free from all stain of sin, fashioned by the Holy Spirit into a kind of new substance and new creature. Adorned from the first instant of her conception with the splendors of an entirely unique holiness, the Virgin of Nazareth is, on God’s command, greeted by an angel messenger as ‘full of grace’ (cf. Luke 1:28). To the heavenly messenger she replies: ‘Behold the handmaid of the Lord, be it done to me according to thy word’ (Luke 1:38)” (Vatican II,Dogmatic Constitution on the Church, 56).

Are you looking for a resource to learn more about Mary? You are in luck! Here are several great books we highly recommend! (All can be found at our local Catholic Book and Gift Store. Click Here for their website)

Behold Your Mother by Tim Staples

The Solemnity of the Immaculate Conception is a Holy day.

Here is a list of Catholic Churches to go to on Monday: 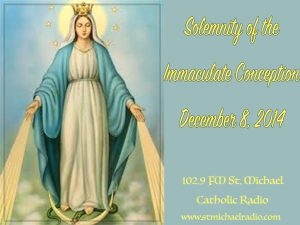